The voting button is one of the critical tools of a parliament member. By pressing the vote button, MPs deliver on their electoral promises, provide confirmations to their speeches, and thus, contributes to the development of the country.

However, the experience (especially of totalitarian systems) demonstrates that a large body of parliament does not always perform the above functions. Instead of being a place for debate, different opinions and a struggle between supporters and opponents of an idea, a parliament can turn into a rubber-stamping agency. One way to assess the extent to which the country’s parliament is indeed a platform for different opinions, different views and ideologies (as it should be in such a multi-party parliament as the current Kyrgyz parliament) is to assess the level of diversity of opinions and divergences in the voting process.

How does the current Kyrgyz parliament score on the vote division? Several graphs illustrate it. Thus, as Graph 1 shows, in 99.27% instances of plenary voting, a bill was approved while only in 0.72% of cases the MPs voted down the proposed legislation. Graph # 2 shows the result of a typical, or average, voting on a bill in Jogorku Kenesh. The figures are the average indicators based on the results of 1784 voting protocols entered into the database of this portal. It suggests that out of 120 MPs, 102 would routinely vote in favour of a bill, 2.8 MPs would vote against, and 14 MPs would be absent. Finally, Graph # 3 demonstrates, in greater detail, the level of unanimity or difference among MPs. Out of 1,784 instances of voting on a bill, 1,124 were approved unanimously. In 480 cases the voting revealed less than 5 MPs voting against the bill.

Data is retrieved from an online portal “This is your parliament”. It is produced by Crossroads Central Asia with support of the Swiss Agency for Development and Cooperation (SDC) project “Strong parliamentary democracy with active participation of citizens” implemented by UNDP in the Kyrgyz Republic. 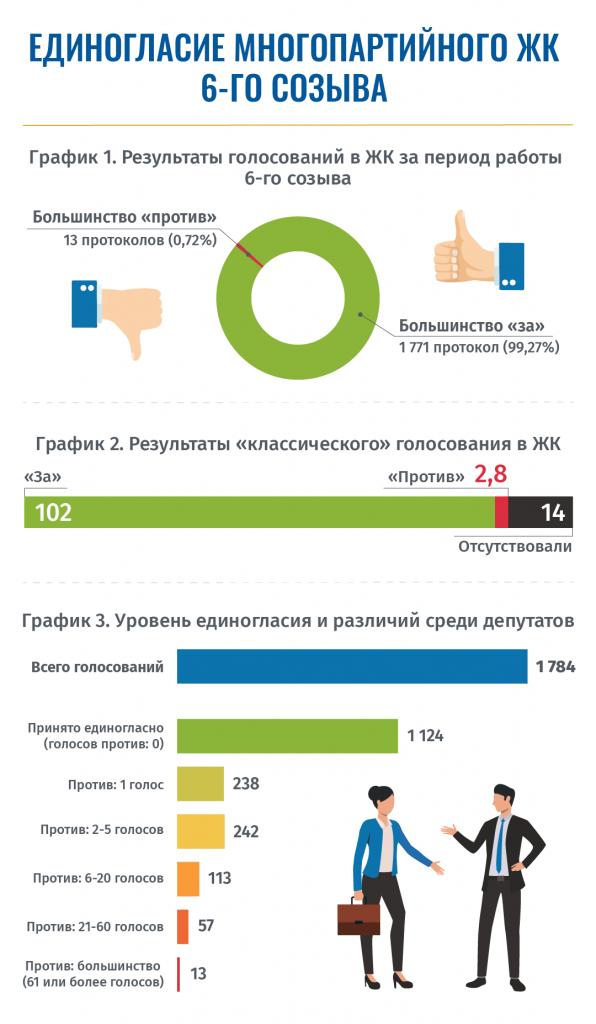