Turbulence in Kyrgyzstan: a hijacked revolution or business as usual? | Crossroads Central Asia
Skip to content

Kyrgyzstan plunged into an acute political crisis following the 4 October 2020 parliamentary elections. The events exposed a complete bankruptcy of the country’s political establishment. For several days, Bishkek’s streets turned into a scene of warlords, with crowds racing to take control over buildings and squares in the country’s capital. What has happened in Kyrgyzstan, and what does it tell us about?

The current crisis was kicked-off with the parliamentary elections on 4 October 2020. Sixteen parties contested 120 seats in the unicameral Jogorku Kenesh, the national parliament. President Jeenbekov repeatedly denied supporting any party, but few in Kyrgyzstan believed such claims. Three parties were widely seen as the “pro-presidential troika”, including Birimdik, Mekenim Kyrgyzstan and Kyrgyzstan parties. They were packed by former government officials and wealthy businessmen, including many with shady backgrounds. President’s brother, Asylbek Jeenbekov oversaw Birimdik while Mekenim Kyrgyzstan belonged to Raimbek Matraimov, former deputy chief of the customs service, alleged to be the architect of sophisticated corruption schemes.

The election results confirmed a landslide victory for pro-presidential parties. Combined, they won 58% of votes but were poised to control 88% of seats if election results would hold (see Table 1). The only opposition party to gain seats, a nationalist-leaning Butun Kyrgyzstan, would be the smallest faction. In short, the results skewed the political balance as the 7% threshold excluded several bigger parties from the game. Some called the elections “the dirtiest” in the Kyrgyz history. This may not ring true to those who remember the Kyrgyz politics before 2010. However, the Sunday elections featured mass-scale vote-buying and use of administrative resources to the benefit of the above-listed troika.

Table 1: Preliminary results of parliamentary elections in Kyrgyzstan on 4 October 2020

Note: the election results were cancelled by the Central Election Commission and have no legal meaning. 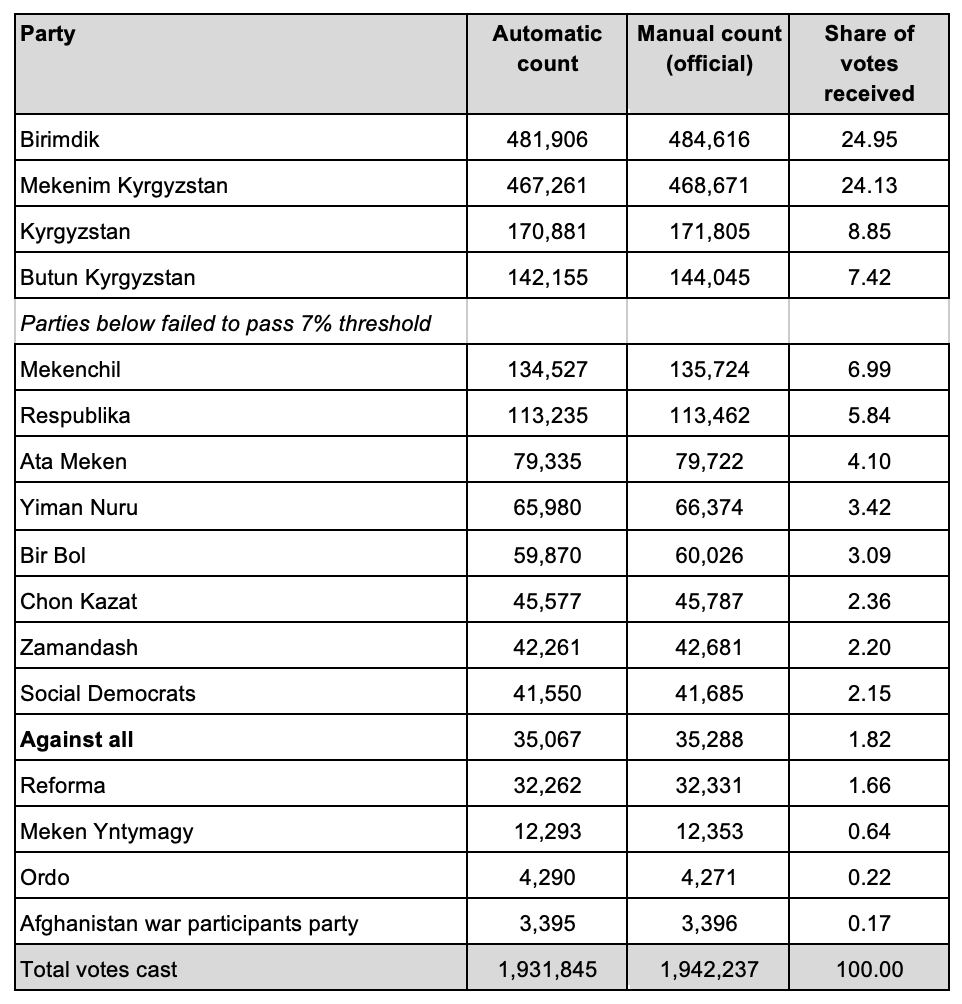 * Table is created based on figures of the Central Election Commission at http://ess.shailoo.gov.kg on 12 October 2020.

The government collapsed the next day, on 5 October. Following the announcement of the early results, several opposition parties gathered in Bishkek’s main square, protesting the results and demanding new elections. Police used force to disperse the crowd, killing at least one and wounding hundreds in the process. However, within hours, people returned to the scene and captured the government building that hosts the president and the parliament. Protesters released several high-profile prisoners, including former president Atambaev, his close allies and the former parliament member Sadyr Japarov. President Jeenbekov, the government, parliament or law enforcement forces were nowhere to be seen or heard.

In 2005 and 2010, the power changed hands in Kyrgyzstan when protesters took control over the government building. It was different this time. While the incumbent government was literally missing, no political group emerged to impose itself and assume political control. Eight parties formed a “coordination council” that called on the parliament to convene and create a new legitimate government. Next day, several smaller, and more radical, groups declared creating another “coordination council” which announced itself the only legitimate power in the country. In the heat of events, few took notice of it. In the meantime, Sadyr Japarov, a former MP, fresh from the prison, proclaimed himself new prime minister following a hasty meeting of the parliament in one of Bishkek’s hotels. Friday saw a showdown, with the former president Atambaev, joined by former prime minister Babanov, led their group to the main square only to get attacked by Japarov’s better-motivated supporters.

As political leaders remained busy trying to take control and prevent others from doing the same, various political groups started attacking government buildings across the country. Offices of the prosecutor general, oblast governors, city mayors and even heads of local municipalities change hands, sometimes more than once. Major businesses came under attack from crowds, including local and foreign mining companies. Bishkek’s residents once again showed up as “druzhinniki” to prevent looting in the city.

Opposition’s failure to assume political power after seizing the government buildings allowed President Jeenbekov to take a breath. On 9 October, he declared an emergency in Bishkek city, ordering the military to secure the city. He also invited the parliament to convene at his Ala Archa residence in the southern part of Bishkek to vote for prime minister. On 10 October, the parliament voted Sadyr Japarov as prime minister. The same day, former president Atambaev was arrested, reportedly for instigating mass disorder.

The election of Sadyr Japarov as prime minister on Saturday (much to the joy of his very loud and aggressive supporters) will likely be revisited in the coming days. Analysts and politicians, including some known for unwavering support for president Jeenbekov, claimed the parliament had no quorum, and thus, the vote for Japarov had no legal meaning. Therefore, this week the president will surprise many, no matter whether he confirms Japarov as prime minister and resigns himself, or refuses to resign and gets the parliament to replace Japarov with someone of his own choice.

The above narrative is inevitably incomplete. Some details will prove irrelevant, and others will emerge important precursors of more significant changes. Events are unfolding and theories on “who is behind what” keep changing every day. Nonetheless, there are several themes that keen observers of Kyrgyz politics will take note of in the developments of the past week.

Rehearsal for a presidential transition?

The current events are very much about the next “patron”. President Jeenbekov’s term ends in 2023, and the Constitution does not allow a second term for presidents. Being a former president in Kyrgyzstan is a risky business. If Akaev and Bakiev fled the country from the popular uprising, Jeenbekov himself oversaw the jailing of his predecessor, Atambaev. Packing the parliament with loyal parties would allow greater freedom to devise plans for a smooth and secure power transition. By the same token, for most opposition leaders, at stake is the president’s seat.

The above is a reminder that Kyrgyzstan remains a system dominated by the president despite all talk of parliamentary democracy. Several parties that ran for elections called for a switch back to the presidential system. However, even without that, both Jeenbekov and his predecessor Atambaev demonstrated how presidents could reduce the parliament to a rubber stamp agency. There is much work ahead before the politics in the country catches up with the spirit of the Constitution.

The events once again exposed the growing role of organized crime in Kyrgyz politics. This is not news in Kyrgyzstan; many active politicians, including some party leaders, have semi-criminal (meaning criminal but legally not) background. In the past week, widespread reports pointed to criminal groups among the protesting crowds of different stripes. Acknowledging the issue, civil activists gathered a massive protest action named “The country without organized crime”. At the same time, the deputy speaker of the parliament Aida Kasymalieva reported she and other MPs were directly threatened by colleagues with criminal links.

The opaqueness of how the criminal “underworld” communicates and collaborates with politicians often relegates the subject to a footnote. The rise of Raim Matraimov as a not-so-secret grey cardinal of the Kyrgyz politics of the past years, the massive reference to “chernyie” (blacks, a reference to organized crime group members) during both election campaign and events of the past week suggest more research is needed to establish which boss is the real one in the country. Illustrative is the confession of Omurbek Suvanaliev, until recently deputy secretary of the country’s security council, who said “The situation is this – criminals have prevailed over politicians. All politicians are afraid that they will be beaten, their firms will be attacked, their houses will be set in fire, they will be ‘taxed’ and so on.”

Most political parties in Kyrgyzstan remain ad hoc associations to get individuals into parliament. There is a degree of consensus among local analysts that reading party programs is a waste of one’s time. At the same time, the recent developments suggested an ideological divide between liberal and conservative groups is becoming more evident. Both groups made their presence much more visible than in the past. This is less relevant to the events of the day but likely more relevant for the years to come.

A newly created Reforma party stood out for its radical call for riddance of the old political establishment. Ata Meken and Bir Bol parties packed the top of the party lists with well-known civil society activists and businessmen. Calling the above a liberal camp would be an overstretch at the moment. Moreover, the chances remain slim for this group to reach executive power via free and fair elections. However, during the current events, this group stood out as an anti-establishment, anti-nationalist and pro-democracy group able to mobilize supporters in Bishkek. The lack of unity, particularly on whether or not to pragmatically join forces with some old guard politicians will remain the biggest challenge for the group.

Mirroring the pro-reform group above, populist-nationalist groups have also been on the rise. Election results gave a boost to Adakhan Madumarov and his Butun Kyrgyzstan, Kamchybek Tashiev and Sadyr Japarov of Mekenchil party. These are politicians that readily resort to the rhetoric of order, nationalism as well as the nationalization of major companies such as gold mining. The above contains more populism than anything else. However, the strong support they see through a ballot, in social media and on the street suggests the base for such politicians is more likely to grow than diminish.

Finally, there is a question of whether we see a pair of external hands behind the events in Bishkek. The matter is as opaque as the role of criminal bosses: all seem to know something but little more than that. Russia is the single dominant partner in Kyrgyzstan and will always find parties readily seeking its advice. Moreover, any turmoil featuring a stalemate situation increases chances for the third parties to weigh in. However, the public part of the electoral campaign and clashes on the streets of Bishkek will be of little interest for geopolitics-minded observers. Having foreign advisors is commonplace for Kyrgyz politicians but having a debate on foreign policy is much less so.

Shairbek Dzhuraev is co-founder and president of Crossroads Central Asia.