Transition plans gone awry: is the downfall of Atambayev an argument for democracy? 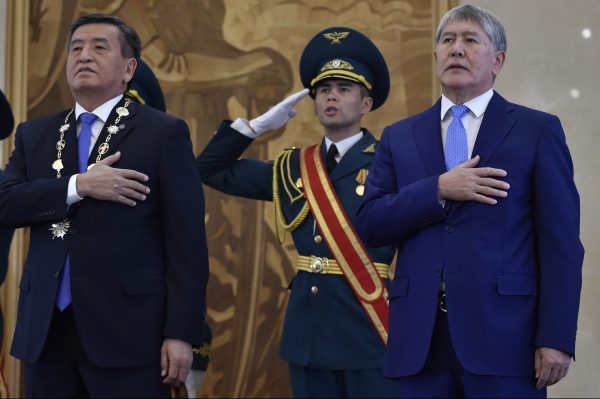 In October 2017, Kyrgyz President Almazbek Atambayev oversaw a peaceful and orderly election and the installation of a new president, all in accordance with the constitution. For the first time, apparently, a truly peaceful handover of power took place and Kyrgyzstan could now claim that it had made a significant step toward democratic consolidation. In reality, the processes were highly problematic. The campaigning and the election featured significant abuses that were meant to ensure the right outcome for the outgoing team. In the end, the “right” candidate did indeed win, but the post-election political environment evolved in ways that were very contrary to the ex–president’s obsessive interventions and hopes.

The story of Kyrgyzstan over the last two years is an undemocratic, cautionary tale about patronal politics at work. It is a lesson for political analysts, donor communities, and democracy advocates to look beyond regular benchmarks such as the holding of an election, the handing over of power, and the minding of constitutional provisions. What are the necessary conditions under which an incumbent might peacefully step down and allow in a legitimate successor? Likewise, what are the risks an outgoing incumbent faces when contemplating his or her departure from office? Atambayev did not feel it was right for him to leave office if just anyone won in the open election. He thus had kept afloat the option of prolonging his term and staying in office, but such a move would have been more dangerous for him than the option of creating favourable conditions—controlling the risks—of a safe exit from the presidency.[1] His delayed decision that a well-scripted exit option would serve him best is a telling story of patronal-political obstructions, of a power player ultimately losing the game anyway, and of how letting democracy take its course could have served the former leader best.

Before and After the Handover of Power

Much of Atambayev’s nearly two-year-long preparation for being an ex-president was contrary to the spirit of instilling a stable, open, and law-based democratic governance system. His busybody efforts of ensuring a safe and influential ex–presidential life for himself—a scenario whereby the new president would essentially be a figurehead or a pawn—shows how an outgoing president in a patronal system can behave. This circumstance is quite different from the familiar model of a lame duck leader in the West. The Atambayev case shows how scheming and botching democratic processes may backfire under certain institutional conditions.

In the 2015 parliamentary elections, which were viewed as preparation for the presidential elections of 2017, Atambayev was closely engaged in campaigns for the benefit of his party, the Social–Democratic Party of Kyrgyzstan (SDPK). Although the party fell well short of a majority, it increased its representation in parliament. He then proceeded to fill all of the important positions with SDPK members and his own loyalists (including the appointment of his close aide, Sapar Isakov, as prime minister just two months before the presidential election).

Atambayev’s disputed and legally questionable pushing-through of a constitutional referendum in 2016 was a key link in the process of creating good conditions for him to leave the office. The backlash over the referendum helped Atambayev “draw lines” to identify his adversaries. Thus, from late 2016 and through most of 2017, a crucial transition condition was being implemented: the neutralization of political opponents in the playing field. As criticism increased, the process included the neutralization of the most critical journalists and media outlets.

Naturally, the handling of the presidential elections per se was a major part of his task list. Atambayev selected, quite late in the process, Sooronbay Jeenbekov as his frontrunner. Jeenbekov was a long-time party member of SDPK, a recently appointed prime minister, and “my friend” as the president liked to refer to him. What followed were manipulations by the Central Election Committee, abuse of judicial processes, mobilization of state employees countrywide, and the president’s own aggressive campaigning on behalf of Jeenbekov and against the other candidates. In short, Atambayev oversaw an election that was far from clean and democratic.

When he presided with satisfaction over the inauguration of his “friend” and then received the title of Hero of Kyrgyzstan from the new president, Atambayev knew little of what lay ahead. Why should he be concerned? All of the top officials he handpicked were in place, including the Chief of Staff of the new president.

But in February-March of 2018, the Atambayev gameplan began to unravel, starting with the aforementioned Chief of Staff being forced to leave the office. One year later, all Atambayev appointees were out of the office and many of them behind bars on corruption and other charges. The parliamentary faction of the SDPK—still dominant and leading the ruling coalition—turned its back on the ex-president and defied the party’s call to leave the coalition and become an opposition, thus creating a curious institutional split. As an initiative in the parliament to strip the ex-president of immunity became caught up in legal confusions, it grew apparent that Atambayev could realistically face criminal charges.

Several aspects of the unfolding story of presidential succession in Kyrgyzstan are worth attending to in particular, albeit only briefly here. They are relevant for cases other than Kyrgyzstan’s and presage complications and unintended outcomes for agendas of institution building and democratization if unheeded.[2]

One observation is the speed with which Atambayev, the most highly ranked politician in polls just before the election, suddenly lost his luster, while Jeenbekov, who was weak and unpopular, quickly gained strength and support.[3] The principal reason for such a dramatic reversal would be the position itself: the presidency makes the office holder legally powerful.[4] Although holding the top office is not a sufficient guarantor of being able to manage complex political processes, it is a necessary condition for a relatively weak, unpopular, and contested politician to be able to quickly gain power and prestige. Thus, while informal networks are key in patronal politics, the events in Kyrgyzstan show how formal office is what has tipped the reversal.

Another point of interest is the quick change of patrons by SDPK parliamentary members. The party had grown synonymous with the name of Atambayev. With the first signs of the latter’s weakened position, however, most of the faction members began to side with Jeenbekov and against their former colleagues and party peers, including the prosecutor general, the prime minister, the mayor of Bishkek and, soon enough, against Atambayev himself. This shift reaffirms the observation that parties in Kyrgyzstan are generally fluid, ideationally vacuous, and personality–centered organizations of situational convenience. The prominence of the SDPK had been, obviously, due to Atambayev’s presidency, a situation not much different from that of Kurmanbek Bakiyev and his Ak Jol party a few years earlier.

The third phenomenon of interest comprises the tactics of Jeenbekov. While his rhetoric and style were rather different from Atambayev’s, the new president’s moves in the political arena were similar to those of Atambayev when he first took over. Jeenbekov spearheaded slogans of fighting corruption and persecuting opponents (even on flimsy evidence). What transpired was that the same criticisms voiced against Atambayev’s anti-corruption fights became, in just one year, increasingly levelled against Jeenbekov’s, with people calling his moves politically-motivated, one-sided, legally questionable, and focused on persecution rather than prevention.

The persecuting of political opponents by dubious legal charges has occurred in Kyrgyzstan in a cyclical manner with every change of leadership, in post-Akayev, post-Bakiyev and now post-Atambayev transitions: each time, a similar cleansing of the top echelons of the previous administration. This trend of court-aided neutralization of opponents suggests a path dependent pattern. The more well-trodden the path, the more skilful and ready-to-help are the key personnel in law enforcement and justice structures. The more effective and harmless the path grows to a new leader, the more attractive an instrument it becomes. The more the cycle is repeated, the less attractive it becomes to abandon it. Given the well-trodden path, going down a new path featuring numerous free-ranging political opponents and a bureaucratic machine unsure how to act would seem to involve too many risks and dangers. But by Jeenbekov’s turn, the pattern has begun to reveal a still greater danger—every cycle has been turning against a leader in a boomerang blow.

Another aspect is the Kyrgyz parliament. Despite constant rhetoric from the country’s leaders that they are building a parliamentary democracy, Kyrgyzstan does not constitutionally have a parliamentary system of government (perhaps a mixed one at best) nor is it substantively a parliamentary democracy. In the constitution (2010) and its amendments (2016), many elements leave doors open for a strong president and a pliable parliament. In a rejoinder to the first point above, the formal rules set in the constitution now yield to the power, recognition, and prestige that the president—Atambayev and now Jeenbekov—commands at the expense of the other main nodes of power: parliament, prime minister, and judiciary system. This has been a result of many ingredients, among which are:

In the presence of such institutional, informal, and attitudinal factors, it is hard to imagine Kyrgyzstan being able to engrain an authentic parliamentary government.

The observations and their implications presented here lead to a general conclusion: formal institutions are effective when they are substantively entrenched and backed up by real interests and commitments; entrenched practices and interests will prevail where (new) formal institutions go counter to them. The failure of parliamentarism and the abuse of courts illustrate the two halves of this.

In Kyrgyzstan, the office of an elected president is a formal, constitutionally established office, which is also entrenched in practice and linked to strong interests that use the office. By contrast, the formal rules envisioning a strong, if not leading, role for the parliament, are not supported by preceding practice while parliament-based interests are disorganized and internally competing. The well-entrenched, path-dependent practice of using courts for political purposes can easily cast aside a sudden push toward playing by the formal rules of law (treating people impartially and without political motivation).

The implications of these general propositions, which draw a gloomy picture in Bishkek, boil down to the need for—yes—democracy. If democracy were measured not by the benchmark of a peaceful handover of power from one president to the next, but by the longer and broader political processes before and after elections, the ominous story of a self-serving Kyrgyz ex-president could have been avoided. In a more genuinely democratic scenario, Atambayev would not have made such a long list of enemies trying to secure his own future. He would not have pushed for his preferred candidate against all odds and rules, and would not have tried to control the new president once he left the office. Political parties would have fairer chances of getting into the legislature and government. Intra–parliamentary divisions would remain, but there would be serious incentives for policy and interest coordination. Parties and the parliament would grow sturdier as institutions. In the end, the ex-president would have greater chances than presently to enjoy a peaceful and dignified retirement.

Emil Dzhuraev is Senior Lecturer in the Politics and Security program at the OSCE Academy in Bishkek, Kyrgyzstan.

This policy memo was written for and posted at PONARS Eurasia.

[1] Atambayev said he could stay in office but the constitution specifies a single, six–year presidential term.

[2] An obvious case of relevance is the leadership transition in Kazakhstan, where democratization may not be on the agenda, but the institutionalization of leadership beyond Nazarbayev is.