The protests against rigged parliamentary elections in October 2020 led to the resignation of the president in Kyrgyzstan. In January 2021, Sadyr Japarov, a former parliament member, became a new president following a landslide electoral. The vote also confirmed broad popular support for a presidential form of governance. The article reviews the latest developments and offers observations on key opportunities and risks for development and stability in Kyrgyzstan, arising from the January vote.

In January 2020, Kyrgyzstan voted for the new president. Sadyr Japarov, a former parliamentary member, secured a resounding victory, grabbing 80% of the votes. Adding icing on his cake, voters also strongly endorsed Japarov’s proposal for a presidential form of governance in the country. Thus, political developments that unfolded in early October resulted in the unscheduled replacement of the country’s president and cleared the path towards a major constitutional overhaul.

What factors contributed to such rapid changes in Kyrgyz politics and what are their likely consequences in the coming years? This article will address these questions in four sections. The first part provides a brief recap of events that led to the January 10 vote. The second section discusses some opportunities that a landslide vote results offer to the incoming country leadership. The final part discusses three areas that will be under risk if the popular vote produces populist strongman.

From October to January: the rise of Sadyr Japarov

On the eve of 2020, Kyrgyzstan entered the zone of political turbulence. Mass protests led to the cancellation of parliamentary election results held on October 4, 2020. Fearing the worst, President Jeenbekov and his government chose to self-isolate in full, disappearing from the public view for several days. However, the protesting parties reached a stalemate. As some debated “lustration” and others demanded new elections, Sadyr Japarov emerged the impasse’s biggest beneficiary. Fresh from the prison cell, and commanding a devout crowd on the street, Japarov forced himself into high offices. On October 14, parliament approved him as the new prime minister, and the next day he became acting president.

Three months later, Japarov became the elected president of the country. He comfortably beat some seventeen contenders. The race was symbolic, with little nerve and anticipation. Japarov grabbed nearly 80% of the vote, with the second-ranked Adakhan Madumarov receiving less than 6%. Although Kyrgyz politics can hardly be discussed in terms of ideologies, it is noteworthy that none of the liberal-leaning candidates received more than one per cent. The referendum on the form of governance, held on the same day, produced mirroring results. Over 80% of voters endorsed “presidential form of governance”, clearing the path for a major constitutional overhaul. 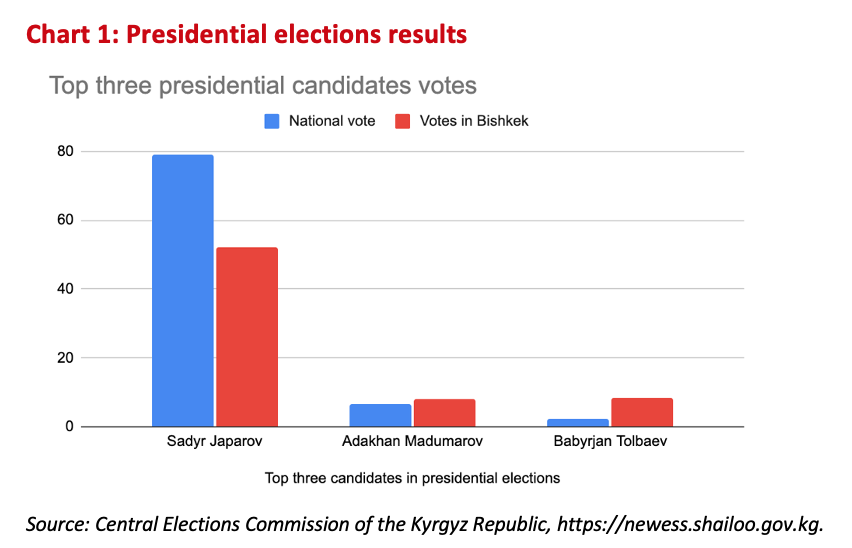 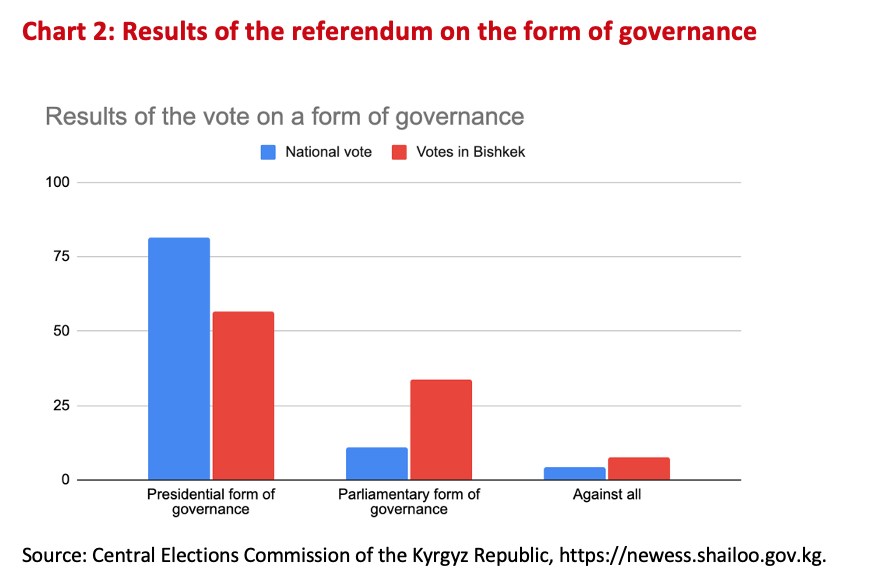 For some, the election results came as a cold shower. The October 5 protesters demanded new parliamentary elections but not presidential elections nor changing the constitution. The October protest got hijacked, in other words. Furthermore, Kyrgyzstan was much commended for experimenting with parliamentary democracy. Now, suddenly, people voted to return to a presidential form of governance. This left many to question whether the whole discourse of “parliamentary democracy in Kyrgyzstan” was not only misplaced and overblown but also inherently limited to a few quarters of central Bishkek.

At the same time, the voting results did not come as a surprise. First, Japarov, like Bakiyev in 2005 and Atambayev in 2011, was a de-facto “post-revolutionary” leader, reaping all benefits from the fall of his unpopular predecessor. The contest for the presidency was rather symbolic, confirmed by unprecedentedly low turnout of under 40%. Second, Japarov’s campaign targeted voters in the rural area, where his populist rhetoric and open disregard for the due process were easiest to sell. Unsurprisingly, in Bishkek, voters demonstrated the least support for Japarov and the biggest support for a parliamentary form of governance. Finally, the voting results exposed more profound public dissatisfaction with both the sitting president and the political system. The October protesters in Bishkek might have assumed rigged elections were the problem, but that was certainly not the only problem for the broader population.

Noteworthy, many political and civil society activists continue to question the legitimacy of the vote in the first place. Some questioned the Supreme Court’s dubious decision to acquit Japarov in October 2020. Others claimed Japarov could not run for the president because of acting president status. The decision to let the population choose between two concepts of “presidentialism” and “parliamentarism” was also clearly ill-considered and politically irresponsible. That said, in the post-election period, observers will also need to look forward and assess the likely implications of the January vote for the near future of Kyrgyzstan.

Between popular and populist: a carte blanche for reforms?

There are essential benefits of broad public support for Japarov. Perhaps the biggest is the chance to push through critically important reforms, including highly unpopular ones. Policy areas that require such actions are abundant in the country. Fighting corruption, improving revenue collection, cutting public expenditure will all require actions that will hurt many. For past decades, Kyrgyzstan has become an economy heavily dependent on injections, whether from donors to the budget or labour migrants to each household. Most policy reforms would get killed by corruption, incompetence or for political costs to the ruling regime.

Japarov’s electoral victory removes the problem of political insecurity for a moment. The overwhelming support of the population for the “presidential” system may also contribute. An opportunity to quickly mobilize and allocate government resources is one of the few benefits that a president-dominated “power vertical” offers. Revisiting the state’s subsidizing of energy tariffs, for instance, could address one of the ages-long headaches of the Kyrgyz government. However, succeeding on painful reforms will require Japarov to simultaneously deliver tangible progress in many other areas, from creating jobs to fighting corruption.

A popular and empowered president may indeed have the above opportunity. However, there is a not-so-fine line between being popular and populist. Japarov gained votes less for his achievements or ideas but more for emerging at the right time in the right place. Thus far, his biggest selling points have been populist slogans and a history of being persecuted, a mark of quality for Kyrgyz politicians. Capitalizing on the public support will require Japarov to share his vision for the country, point to key reforms, and select a team, best fit for the task.

Following the January vote, gloomy predictions are abundant in the country. Some point to the alleged links of Japarov to criminals and the former president Bakiev. Others have already accused him of bringing his friends and relatives into high offices. The first days after the inauguration will clear many issues. However, at a broader level, there are three areas under risk stemming from a populist president under a presidential system. The risks are not inevitable, but it will take efforts to prevent them.

Erosion of institutions and the rule of law

The most significant immediate risk is a populist assault on political institutions, including the rule of law. Populist leaders thrive when existing institutions fail the population, but they also actively erode the institutions. Sadyr Japarov’s landslide electoral victory will likely embolden him to speak even more on behalf of “the people”. This is a dangerous situation when the “will of people” gets directly juxtaposed to the system of rules, checks and balances. There are signs of populist disregard for institutions already. Thus, Japarov recently claimed that those protesting against the referendum should be “taught a lesson” since they deny people’s right to choose. Similarly, Japarov’s allies have already indicated a preference to fight corruption through negotiating with suspects behind closed doors instead of respecting the due process.

The above is not to say that the rule of law was better followed in the past. It is precisely the chronic disrespect and disregard for the law by all presidents of the past years that explains high public support for clearly extralegal approaches. What is different is the explicit “people’s mandate” to disregard rules and laws that a populist leader will claim. Some actions will find public support. Recent arrests of the country’s infamous corruption hero, Raimbek Matraimov, and chief criminal, Kamchy Kolbaev looked very much like staged actions. However, they showed the general public that Japarov could do what Jeenbekov had not dared to do. However, sidestepping the due process in the name of ensuring justice can easily lead to more important red lines to get crossed. The erosion of the rule of law in the name of “the people” will threaten vulnerable groups and minorities first and everyone else soon after.

Another risk stemming from the January referendum is the continuous cycle of political instability. Although known as a more democratic country of the region, Kyrgyzstan has not experienced a peaceful handover of power to the opposition. Past elections only led to the reelection of the incumbent or transfer of power to the close ally of the sitting president. In April 2010, following the ouster of president Kurmanbek Bakiev, political scientist Eric McGlinchey compared regime overthrows in Kyrgyzstan to running in circles, with a few people replacing each other. The future return to the presidential system may sow the seeds of further instability cycles, or what Guillermo O’Donnell called “infernal circles” of presidentialism.

Escaping the “coup trap” will require Kyrgyzstan to experience and institutionalize peaceful power succession. This task is most difficult for strong presidentialism in weak democracies. The winner-takes-all nature of such systems means the cost of losing elections is too high. An unpopular prime minister can easily be replaced by the ruling party or coalition in the parliamentary system. Unpopular presidents, as Kyrgyzstan’s experience suggests, do not vacate the office before being forced to do so.

To preempt this risk, Japarov will have to loudly and unequivocally declare the intention to respect the constitutional term limit, ensure orderly and fair elections and step down when his term ends. For this to happen, he will have to respect and strengthen institutions on a daily basis.

Prospects of an international outcast

In case the above risks play out, Kyrgyzstan will also face the risk of turning into an international outcast. Thus far, Kyrgyzstan has managed to retain a curious international personality. With a small and poor economy, it has managed to retain a host of committed development partners. The not-so democratic leaders did not shy away from trying some best practices of better democracies. Internationally, the country leaders mostly maintained working relations with other actors. However, whether Kyrgyzstan can be more of a partner and less of a burden internationally remains a wide-open question for the post-January period.

The COVID-19 pandemic has already exposed some of the “Potemkin village” elements of Kyrgyzstan’s statehood. Even before the virus reached the country, the leaders rushed to seek external aid. It would look slightly less appalling if the pandemic-related aid was not massively embezzled, as the new government claims to have discovered. In this context, the last thing that international partners need is yet another cycle of political instability and resource redistribution, followed by new rounds of begging for help.

Avoiding the prospects of an international outcast does not require constant reassuring of partners or playing tough with them for not good reasons. The new leadership will have to send an unequivocal message to the world about its vision for development, strategy for relations and rules that it will respect and uphold.

Following the January vote, Kyrgyzstan is at a crossroads. In October, the gang-style grab of power earned a little reputation for Japarov internationally. However, the population extended a significant confidence vote to new leaders. Will the new leadership find ways to strengthen the domestic economy and thus lessen its external dependence for basic needs? Will the new leadership ensure that politics is exercised within the law and prevent new rounds of power grabs? Will the new leadership guarantee the rule of law and become the place of opportunities rather than dangers and failures? These are some questions that will shed light on what Kyrgyzstan has gained from the latest upheaval.